Pinkie and I plan on catching the early shows of Marvel’s newest super hero film, Captain Marvel, but before we go see the movie we wanted to just talk about our thoughts and feelings going into the film.

I can’t lie, this poster is pretty rad.

Both of us have known Captain Marvel (aka. Carol Danvers, aka. Ms. Marvel, aka. Warbird, aka. Binary) for a long time. I myself have been in awe of her since my mum chose her as her main in Marvel’s Ultimate Alliance. My mum would often switch between her and Wolverine, so the times I got to play Ms. Marvel I had so much fun. I had no idea who she was, but her suit, her confidence, and her epic abilities quickly made her one of my favourite Marvel heroes.

Pinkie was also introduced to Ms. Marvel through Ultimate Alliance, but he didn’t really think too much of her at the time, but he knew her Binary costume was sweet. From there, his next time seeing her was Bendis’ Mighty Avengers where she appeared to just be the token female of the team, and he didn’t think much of her again. Fast forward a few years to Kelly Sue DeConnick’s first issue of her Captain Marvel run, where Carol finally graduated from Ms. Marvel to the more befitting name of Captain (even though she’s a colonel), and there he learned more about her in one issue than he did reading anything Bendis had done with her. And it made him fall in love with her as a character.

Carol Danvers, as a character, has been through hell back many times. Whether it’s her teammates happily sending her off to another dimension to fuck her son for eternity, or Rogue draining her powers until she fell into a coma, or her battling her alcoholism, Captain Marvel has always found a way to propel herself higher, further, and faster.

Mad: Being a female, I’d been looking forward to an actually good female super hero movie. The closest thing I had was Elektra and, while I do have fun with that movie, it’s hardly good by any stretch of the imagination. It what, has that opening scene which is simply BEAUTIFUL, and then everything else is just kind of grey mush of forgettable fighting and exposition and then some lesbian fan service.

Pinkie: What about the ’84 Supergirl!?

Pinkie: It wasn’t so bad.

Pinkie: …okay, you called my bluff. I can’t defend it. Honestly I thought that we’d be getting a Black Widow film way before Captain Marvel.

Mad: Me too. I mean, once Marvel started pumping out quality films that even critics liked, I was sort of expecting them to break the mold on female-led super hero films too. And then…they didn’t.

Pinkie: Hell, there’s been talk of a Black Widow solo film since Avengers came out!

Mad: Right? Why didn’t they just go for it, you think?

Pinkie: It just seems like they didn’t think it was a commercially viable option at that point.

Mad: And then Wonder Woman happened.

Pinkie: And then Wonder Woman happened! And suddenly they realized, “Hey, we totally can make money off this, guys!” I just can’t believe they let DC get ahead of them.

Mad: Right!? I mean, Marvel was laughing their asses off when Captain America: Civil War kicked BvS in the balls. Everyone thought that movie was going to wipe the floor with Marvel, and then it was one of the worst things to watch all year. And then Suicide Squad happened. DC was in the shitter, and Marvel had every opportunity to really dominate them when they announced the Wonder Woman movie.

Pinkie: I really hope Wonder Woman isn’t going to be a one-off. I hope the reason it was so popular wasn’t just because it was women’s first chance to get a good super hero movie. It seems like Fifty Shades of Grey– This poster is also pretty rad.

Mad: I mean…a little, but I see what you’re saying. The point is that there clearly is a market for these things. There was a hell of a market for Black Panther, there was one for Wonder Woman. This should indicate a potential trend in the future to open up opportunities for more diverse stories making the main stream and being recognized as not only good products critically, but good products commercially.

Pinkie: I have no doubt that Captain Marvel will make money, but I don’t think it’ll make more than nine figures.

Pinkie: When the first trailers came out, apparently there was a bit of a controversy around Captain Marvel punching a little old lady.

Pinkie: Yeah…I always assume old ladies are evil by default, so I knew she had it coming. But I guess elder abuse is a thing so…

Pinkie: What? She was a Skrull!

Mad: True. I’m so sick of these “controversies” where people get into a tizzy over something they refuse to accept the context for. [foreshadowing a future article, maybe?] 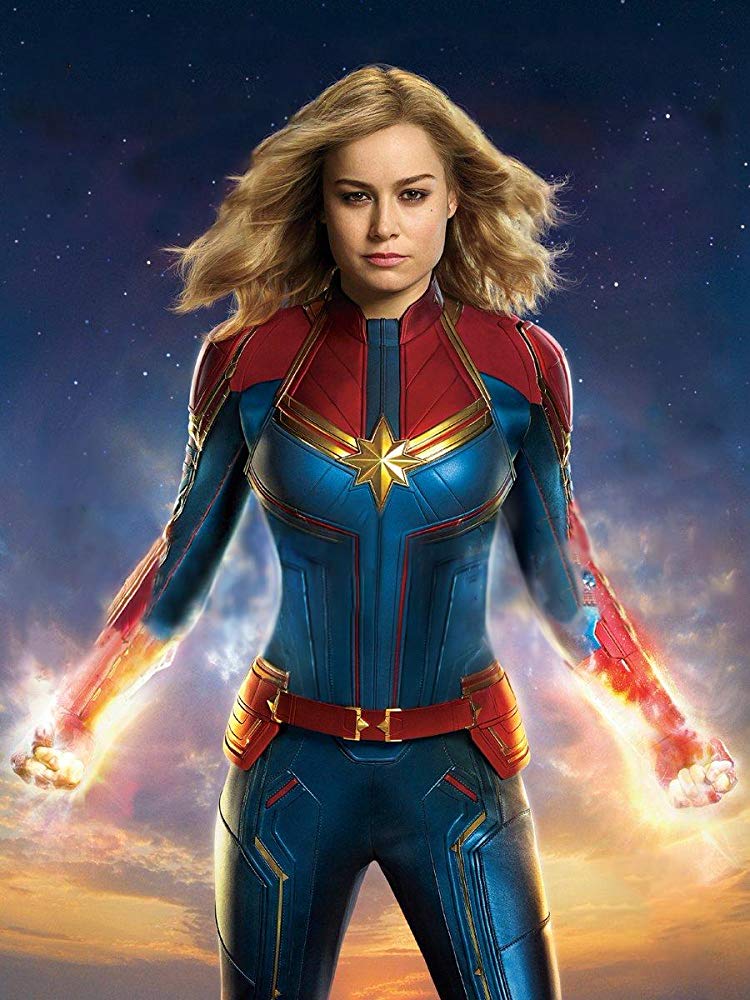 Just…please tell me she has more than this expression, please? And no, the slightly grumpier version doesn’t count.

Pinkie: To be fair, we have our own issues with the trailers too. My biggest issue was that we get no sense of what Carol Danvers was like as a character.

Mad: My problem with the trailers were that they made Carol Danvers look like a block of wood, especially parts of the second one. I’m so sick of the trend of making women appear ‘badass’ by completely removing their personality. This was something that was done more in the nineties and early 2000s, I think, because I haven’t really seen this lately. At least, until now, anyway… I mean, fuck, if Charlize Theron can have a personality and play badass twice (Furiosa and Lorraine Broughton), then there’s no excuse for why Brie Larson appears to be such a passionless blob.

Pinkie: And she’s a good actress! But honestly…I don’t think Marvel has much faith in her.

Pinkie: I mean…look at the trailers, right? Who’s featured almost just as prominently as Captain Marvel?

Pinkie: Someone familiar. Someone fans and audiences will recognize. If he ends up playing as big a role in the film as it seems in the trailer, I think it demonstrates Marvel’s fear that a story featuring Captain Marvel alone wouldn’t be good enough.

Mad: But it should be! Captain Marvel is an inherently interesting character, especially when she’s written well.

Pinkie: The problem is most writers don’t know what to do with her. You know, I get that they needed Fury in here at some point to explain why he had the pager at the end of Infinity War, but they could have done just a cameo or post-credits scene.

Mad: It still had some of the same issues that make me worried about the movie, but you see a lot more of the Carol we know and love in it. We see some of her sass and pizzazz. But nothing beats that Super Bowl trailer.

Pinkie: It distilled her entire character in twenty seconds.

Mad: It legit got my hyped for the movie again!

Mad: God I hate this so much…

Pinkie: I don’t like talking about this. I don’t know anything about it, I don’t care about it, and I’ve just completely avoided it.

Mad: That’s not entirely true, we saw that one video a while back–

Pinkie: And we stopped watching it because we knew exactly where it was going to go.

Mad: Yeah…it really does just seem like the same complaints over and over again. “Brie Larson is an SJW therefore the movie will be propaganda”, blah blah. I don’t want to straw man anyone, and I understand legitimate concerns that they’re going to beat the whole “LOOK IT’S A WAMEN” thing into our faces instead of just telling a good story and treating her like a human being, but I’m not sure it’s as big a deal as the internet is making it seem.

Pinkie: Marvel has a good track record and more than established that they have a good sense of quality control. Best case scenario we get something like Guardians of the Galaxy where it becomes a sleeper hit, and worst case is we get something bland and forgettable yet ultimately harmless like Thor: Dark World.

Mad: Pretty much. I can’t imagine all these claims that it’s going to be painfully virtue-signally are going to turn out to be true. My worst fears about the movie is that it’ll be boring. I never thought it was going to be plain bad.

Mad: So, what are we thinking?

Pinkie: I don’t care about the villain…

Pinkie: I am beyond hyped to get the Skrulls into the MCU, but it kind of seems like we’ve got another Malekith on our hands.

Mad: I don’t like how not green they are…and they’re kind of too wrinkly. They’re only supposed to have those chin ridges, but they’ve made them all kinds of ridgey. I just think they might be kind of hard to look at…

Pinkie: After Killmonger and Thanos, I thought Marvel had finally perfected their formula for villains. And who knows! Maybe I’m talking out my ass, and they’ll be great, but what we’ve seen so far it doesn’t really inspire any confidence.

Mad: Actually…what have we seen, so far? I remember like half a second in one trailer, then the creepy and fiesty old lady, and then I’ve seen some set photos. We actually don’t know anything, do we?

Pinkie: No, and that’s the issue. A hero is only as good as their villain.

Mad: I mean…maybe they’re not showing us too much because they don’t want to spoil how awesome and spooky they are?

Mad: A girl can hope.

Pinkie: I won’t hold my breath.

Mad: That cat’s cute though.

Pinkie: It’s an alien and also possibly a terrorist, so that should be fun.

Pinkie: It also lays eggs. Don’t worry about it.

We’re both hoping the movie will be fun. I don’t think either of us is expecting the movie to blow our minds, and we don’t think it’ll be better than Wonder Woman. At best, I’m hoping it’s just as good as Wonder Woman and proves that that film wasn’t just a fluke. At worst, can it just not be as bad as the last several decades’ worth of female super hero movies?

Pinkie and I have differing views on what could possibly hold this movie back. Pinkie thinks it’ll be the story. He hates amnesia plot lines like no other, and he just can’t imagine they’ll be able to vamp up this cliché in a way that’ll make it interesting for him. I think it’ll be Brie Larson’s performance. I don’t care what she’s like as a person, so long as she’s not assaulting anyone or committing any crimes or being blatantly bigoted and cruel (no, saying she wants more women and people of colour to get jobs as film critics doesn’t count). However, based on the trailers we’ve seen, she does have a distinct problem delivering her badass heroine lines.

Gal Gadot could do it, and more recently Roza Salazar could do it. Both women were able to play badass and vulnerable and cool without seeming weak or stereotypical. Brie Larson declaring that “I’m not going to fight your war, I’m going to end it” just…she sounds like a bratty Valley Girl stereotype or something. It has no gravitas or grit to it.

In any case, we’ll try to see the movie tomorrow, and if for some reason we can’t then definitely this weekend.

Whatever happens, it’ll never be worse than Catwoman…*shudder*

I swear we are still working on Metal. We were going to post the review today, but Pinkie’s brain shorted out from all the bullshit, so we had to postpone it. Soon, darlings. Soon.