This is going to be a short post, I promise. I just wanted to work through some emotions right now.

The trailer for the new Hellboy movie has been out for a while…it’s happened.

When the trailer dropped, Pinkie told me immediately, knowing I’m a fan of the comic and Del Toro. He sent me the trailer. And I watched it. And…hooooo boy.

Before I go any further, let me explain my fandom a little. 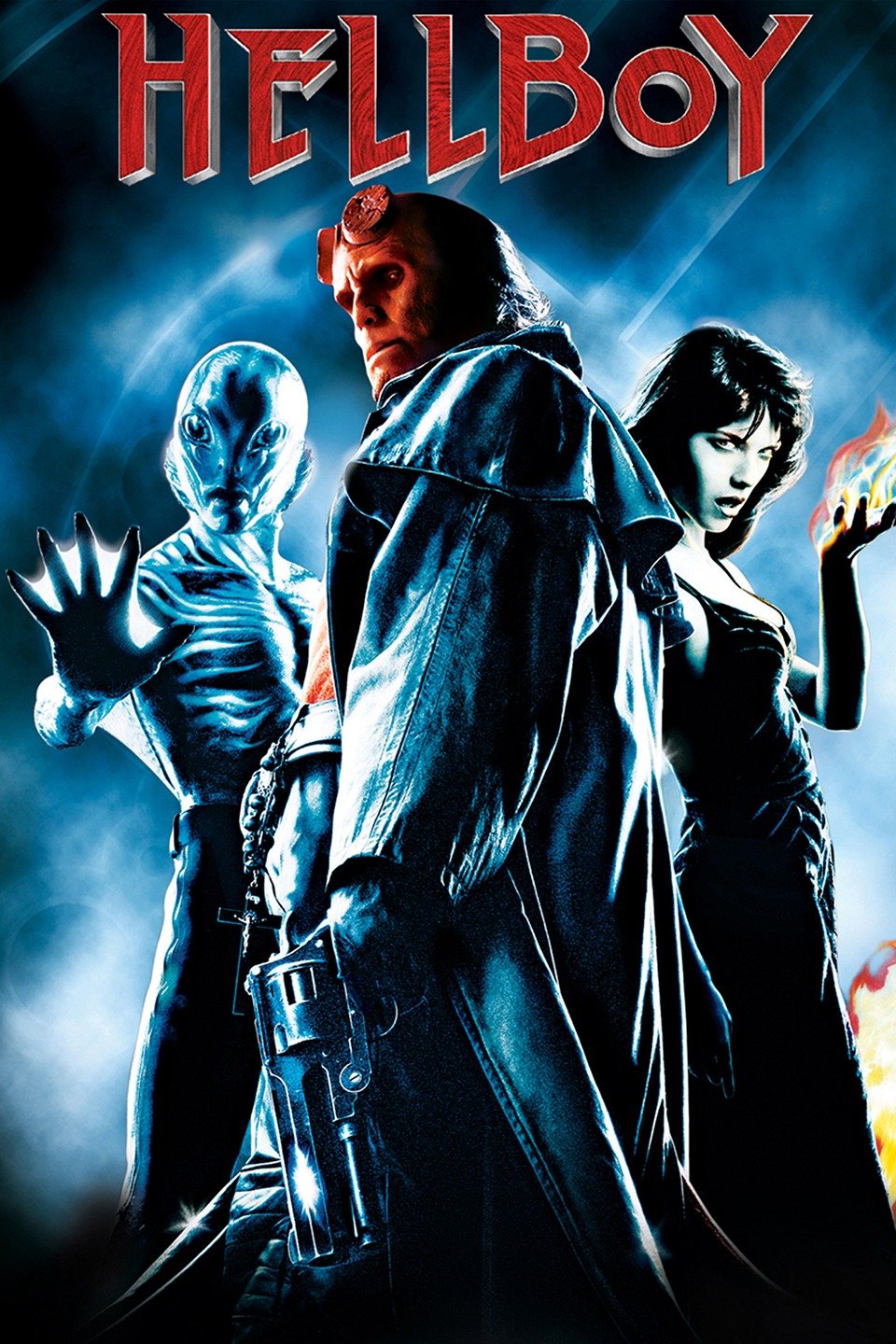 I’ve been in love with Hellboy since like about grade four or five. I didn’t see the first Guillermo Del Toro film in theatres, but my mum let me watch it with her when it was out on DVD. This was my first time seeing anything Hellboy. And I LOVED it.

I know some more die-hard fans out there will cringe knowing I didn’t read the books first. Actually, I didn’t even pick up a Hellboy comic until this past year (I now own volume 1 of the omnibus collection…it’s so pretty!), but still the world that Del Toro showed, a world he so clearly loved himself, entranced me and it quickly became one of my favourite movies of all time.

Then Hellboy II: The Golden Army came out, and I was even more in love. Prince Nuada was dark and sexy, and Abe (my favourite character) got to really shine in this film! He got a tragic love story and a more prominent role in the film. The movie also went full-blown fantasy, as opposed to horror/adventure like the first film, and I adored that. I’m a sucker for anything fantasy, so I loved that movie, maybe even more than the first one.

And alas, it was the last. Del Toro wanted to make a third, but I guess pre-production hell happened and the third movie was scrapped. Everyone had moved on to bigger and better things, and I waited patiently for a time when I would get my Hellboy back.

He’s so FUCKIN’ CUTE. I can’t even <3 I would totally Shape of Water with Abe. Wait…is that TMI?

Cut to late 2017 when a new Hellboy film is announced, and it’s starring the cop guy from Stranger Things! I mean, he’s no Ron Perlman, but I was happy. He’s funny and snide and has the jawline for the job. Then the first poster when up, and there he is in his makeup with the princeling horns and fiery crown and big fuckin’ sword all on display and I was hyped! I’d also heard this film was going to lean in heavily on the horror elements and be spooky, and considering the main villain is the Blood Queen, it seemed like they were off to the races!

Oh…but speaking of race, Ed Skrein took himself off the project because of complaints of white washing. I mean, I was a little disappointed. I love Ed Skrein, and it would have been great to have him in the movie, but he was replaced by Daniel Dae Kim (aka. Jin from LOST), and I’m totally good with that! He really looks like the guy he’s playing from the comics, so it’s all good now.

And then the trailer leaked…and Pinkie sent it to me.

And I watched it.

And I was sad.

We had been promised something closer to the comics, which are horror comics. Del Toro’s movies were great and fun, but they weren’t really horror. They’re pulp films, they’re fantasy films, they’re action-adventure films. Sure, they contain elements of horror, like anything Del Toro does, but they weren’t strict horror, and now that I’ve read the comics myself I can see that. With that in mind, I was excited to see a horror adaptation on the big screen.

This trailer, however, is not a horror trailer. It doesn’t present the film as being a horror or scary at all. It looks like a cheap retread of what we’ve already seen with Del Toro without the man on the job to add his trademark flair to it. There’s even one shot of a giant, faceless grey demon thing with a halo that looks an awful lot like the angel of death from Golden Army had a baby with the Pale Man from Pan’s Labyrinth, with a dash of the Forest God from Golden Army in for good measure.To be fair, it’s the coolest looking monster in the whole trailer, but it’s reminding me of the old Hellboy movies. This is meant to be a NEW take on the franchise. They should be doing something NEW. 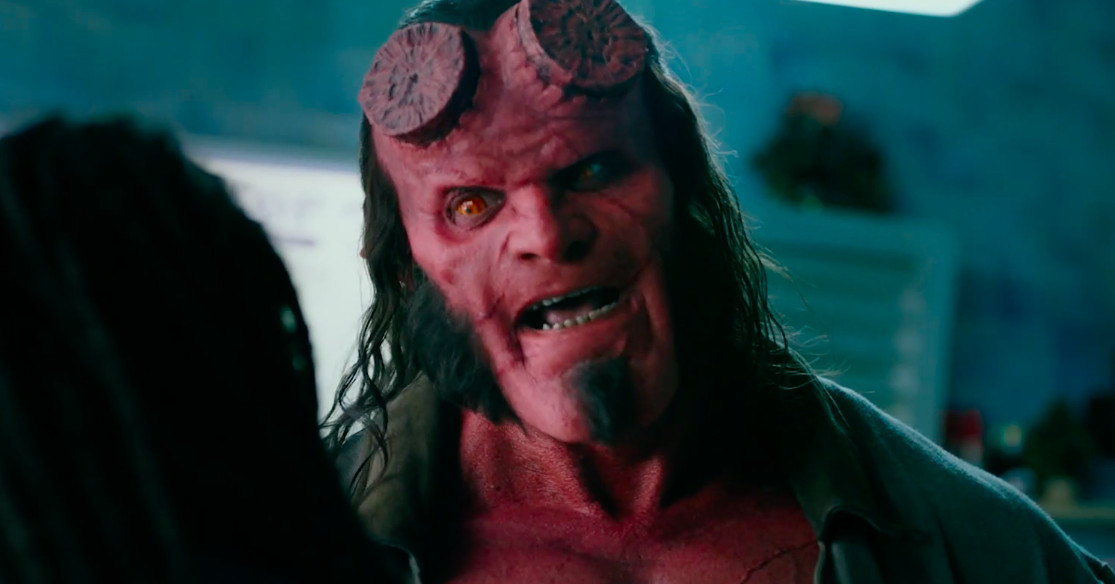 by showing off all these jokes and snarky dialogue and playing Billy Idol’s ‘Mony Mony’ loudly in the background.

God…this is so hard to talk about because I liked the tone from the first Hellboys. I like that song! I even like one or two of the jokes in the trailer! But it’s not what we were promised.

And then there’s the prosthetics…oh God no…

I mean, I’m weird so maybe not everyone agrees, but I’ve never considered Hellboy to be an ugly guy. He has a nice strong jaw, a broad chest, and the red skin, horns, tail and hooves just don’t really faze me. His hair also looks very soft. Even in the comics. So WHY did they make him so hideous in this movie!? He’s covered in disfiguring scars, which wouldn’t be so bad considering his line of work, if the face under the scars didn’t already look like someone hammered it in with a meat cleaver!

I know expecting amazing prosthetics from a movie without Del Toro behind it was maybe asking too much, but he looks okay on the poster! And Ron Perlman’s version of the character looked just like he did in the comics, and the poster looks like Hellboy from the comics, so WHY does it look wrong on camera!? Why does it look like they were using the prosthetics to hide and warp David Harbour’s face when he already has a face that suits the character? I just mentioned how he has the jawline for the job! And you can tell that they were warping his face with the prosthetics because he is essentially EXPRESSIONLESS throughout it!

David Harbour is a good actor, and yet through MOST of the trailer he looks like a mouth-breathing idiot who has no idea what’s going on. THAT. IS. NOT. HELLBOY.

The only time I saw a real expression was at the beginning of the trailer when he yells at a cop for shooting at him. Everywhere else he looks dim and lifeless.

I mean…come on. One of these guys looks more like the comic than the other. Guess which one.

And then you hear the poor man try to talk! I mean…fuck, so many of the lines sound fuzzy and garbled, and it’s probably because of all the shit around his mouth! And I guess they didn’t go back to ADR it and fix it? Like, fuck, people complained about Bane’s voice being hard to understand. The first time I watched the trailer I couldn’t tell what he was saying half the time! It does sound a little better in theatres, as I’ve seen the trailer since my first viewing at the theatres, but there are still a couple lines that are really mushy.

I can’t help but remember comparisons between Jim Carrey’s Grinch performance versus Mike Meyers’ Cat in the Hat. I hate to make the comparison, but it’s pretty apt. Ron Perlman never looked like he had to fight the prosthetics. He looks natural and like the character. David Harbour looks uncomfortable and miserable and like he has to really work to make anything look right. The differences are stark.

It’s hard to even look at side-by-side comparison still images, because in theory David Harbour looks just as good. You might even say he looks a little less cartoony, since the red is a little more earthy and his scars look a little more realistic instead of just indents in his skin. I mean, he’s a fantasy demon so his scar tissue looking different from normal never bothered me, but showing a more gritty, grotesque scarred body would have been totally cool!

It’s when they move that you see the difference.

Note the lines in his face. His face LOOKS like it’s made of SKIN. His brow has wrinkles, his nose has wrinkles. He looks like a person.

David Harbour does not.

Notice how there are no lines in his face. That’s a pretty big expression, but his face doesn’t actually move. This one image REALLY shows how the prosthetic skin just kind of looks like clay on his face…

This is something I love, so maybe I’m being nitpicky, but I was just really disappointed the first time I watched the trailer. The second time I saw it was in theatres and a little spark of hope lit in me. It really does look better on the big screen…but every time I’ve seen it since I just sink further and further into despair…I’m terrified this movie is going to be awful.

Daniel Dae Kim is a good actor, but his British accent is rough, especially when he has talented British actors around him and you can really hear how off he sounds. The jokes, for the most part, I found lame and unfunny personally. They just seemed out of place in a world with such a washed out colour scheme. Some of the monsters look cool. The CGI is rough, but that doesn’t really bother me. Mila Jovovich looks kind of spooky, and I’d like to see more of her in the actual Blood Queen outfit. Her thorn crown looked cool. 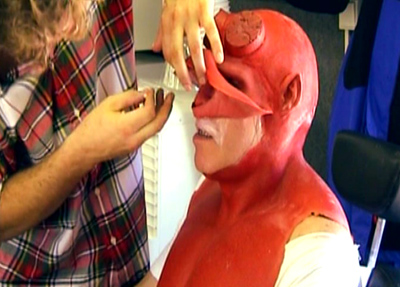 They had to cover JUST AS MUCH of Perlman’s face. There’s NO EXCUSE for why the new Hellboy can’t freekin’ move.

What really fills me with dismay is the last shot of the trailer.

This one shot kind of perfectly incapsulates why this trailer fucks with me.

So, Hellboy, with his princeling horns and flaming crown and badass sword comes rising from a staircase, or maybe a ladder, right? And it’s meant to be this epic reveal shot of his true form. And you get a peek, right? And then he starts to rise, and you’re expecting him to emerge in his full glory and!…

It’s hard to describe but it feels really anti-climactic. It looks and feels wrong. And that’s how this trailer is to me. It presents me with something that should work and should be epic and should get me hyped, and instead I’m left there like, “Oh…that…that was it, huh? Oh…okay…”

I dunno. I hope the movie is good. I’m desperate for people to accept fantasy as a legitimate genre, but if people keep pumping out absolute crap that looks ridiculous then it just solidifies one of my favourite genres as a goddamn joke. It’s been too long since we’ve had something as good as Lord of the Rings – something that says, “HEY! Make-believe is JUST as good as imitating reality”.

Did I think Hellboy 2019 was going to be the next LotR? Well, no. But I was hoping it would help legitimize something that I love. I hoped it would make people fall in love with this character and the world like I did when I was young. I hoped my mum and I could go see it together and bond over our mutual love for the weird and awesome.

Anyway, that’s my spiel. I could talk about this more, but I should wait until we get more trailers to get into any more critiques. I just…I’ve been sitting on this topic for a month now. I needed to get it out.

Next up will be the continuation of my Dark Nights: Metal pain. I’ll admit, I needed more time with this issue…there’s…a lot to deal with.