I’ve had a different book review planned for a while now but fuck it. It’s not getting done at the moment, and I’ve been reading this thing for shits and giggles. Let’s talk about it.

I discovered this book one day after a workout. I needed to go to the drugstore nearby and pick up…I don’t remember. Soap or something. Anyway, as always, I checked out the book section. It’s something I do every time I’m at the drug store. It’s almost a ritual at this point. Even when I have no money to spend on books, I always take a look, just to see if there’s anything interesting I wanted to pick up in the future.

This particular trip, a cover caught my eye. Partially because it had a 25% off sticker attached to it, and partially because the aesthetic of the cover was quite lovely. Most of it is a deep, romantic red fading into black at the corners, with the exposed back of a young woman in a dress standing in stark contrast to the rest of her surroundings.

The title of the book, written in a large, clean font, was The Rose.

Just below the title was a logline, written in pink italicised letters: Cupid’s arrow is the most dangerous weapon…

I guess that’s why they say you shouldn’t judge a book by its cover.

Anyway, I was intrigued, and even though this romance stuff isn’t usually my type of thing, I decided to grab it. It was 25% off, after all, and I like Greek things.

And even though I’d just bought it, as soon as I got home I just kind of tossed it aside and let it sit on my bedside table for a week or two. I’m a bad book momma. But, eventually, I decided, “Why not?”, and picked it up and started to read. I think I did it just cos I didn’t really feel like sleeping yet but was sick of looking at my phone screen.

So I read The Rose and…well, it was interesting.

That makes it sound like I hated it. I don’t. I mean it in the non-sarcastic way. It was genuinely kind of interesting.

We’re immediately met with some kind of meeting for the “Young Ladies’ Gardening & Tennis Club of Wingthorn Hall”. It’s a mouthful, I know, but I guess that’s kind of the point because it’s actually not a gardening and tennis club but a secret escort agency run by a bored and anxiety-ridden heiress so her friends can fuck rich guys!

I said it was interesting.

The meeting has been called because our protagonist, Lia, is being thrown a big graduation party and a fuckton of their clients are going to be guests. Apparently being a madame (or “lady pimp”) is illegal in England, so she’s been keeping this unorthodox hobby from her dear parents, even though all of their friends pay her friends to have sex with them. She’s just called this meeting to tell her girls to behave themselves and refrain from flirting with their Johns in front of their wives. 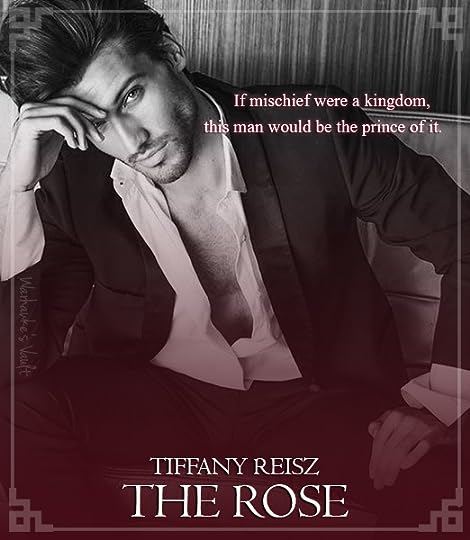 One of the first images to pop up when you google The Rose. Yep. Romance novel. He cute tho, I guess.

But, if I can binge watch shit like Scandal, then I could force myself through the first few chapters of this book, surely. So I pressed on.

I will comment now that the writing isn’t terrible. The book’s author, Tiffany Reisz, is advertised on the cover as a “USA TODAY Bestselling Author”, but it’s not like that means much – lest we forget the phenomenon that was Fifty Shades. I wouldn’t classify Reisz’s writing as particularly skilled or poetic, but it gets the job done and it has a good flow to it. Even when the dialogue is a little unrealistic or cringey, it doesn’t really pull me out of the reading experience, and I guess it’s talent enough to be able to write pretty basic romancey shtuff and still keep it interesting for someone who usually would have zero interest.

During the party, which Lia has been absolutely dreading (and who can really blame her? Parties suck, right?…right? Just me? Oh…ok…), we finally meet our leading man, a sexy Greek fellow named August. And, damn boi, August is thirsty right off the bat. He just up and flirts with her right in front of her mother without a care in the world, and – despite having only just met her – requests to sit with her at dinner. I mean…jeez. That’s quite forward. But I guess a devilishly handsome guy with trouble written all over him giving you all the attention is…nice?

Anyway, during the dinner, Lia’s dad gives a cringey speech and gifts his daughter an ancient Greecian kylix (basically a wine cup, the ones that have those iconic Greek paintings on them). We soon discover that it is because of this kylix that August decided to attend the party.

Here’s where we get to the good stuff! And by good stuff I mean the mythology stuff, not the sexy stuff. Though that’s coming up soon too.

August tells Lia that this kylix is dangerous, and not just cos it’s old and the ancient paint might make you sick if you ingest it. Apparently, this kylix is known as the Rose Kylix, and was used during special rituals performed by the Eros cult in Greece (cult, in this context, meaning a religious sect focusing on one specific deity, not scary, Kool-Aide drinking weirdos hoping to be transported to the planet Xanadu or whatever). A Greek Kylix! With boobies! I thought this was a good example, considering the subject matter.

The Rose Kylix was blessed by the goddess Aphrodite and whoever drinks from it will have the bestest sexual experience of their lives! Hence why the cult of Eros (aka, Cupid) liked it so much. Though apparently Aphrodite stole it back because she got mad that her son’s cult followers were having more fun than her own.

Of course, this is a pretty outlandish story, but August flashes Lia his lower-hip tattoo of a rose as proof that he is a modern-day member of this cult. He also admits to being a prostitute, which, in his words, means they have “a lot in common” (Chapter 6, page 49).

Lia doesn’t believe his story, but when he offers to show her that what he’s saying is true, she can’t help but want to give it a try. I mean, who wouldn’t want to drink wine from an ancient vessel with the power to send you on a crazy sex dream with a guy you’ve only just met and barely know and consistently describe as, “trouble”?

Again, I am the worst romance book reader.

Sketchiness of the situation aside, Lia partakes and, shock and awe, turns out August was right!

Just before drinking from the Rose Kylix, August asks her what her sexual fantasy is. She’s understandably thrown off by the question, but eventually admits that her first time was God awful and she wishes she could re-experience that night, but with someone else. August, having discovered she’s a bit of a fan of the story of Perseus and Andromeda, decides to make that their fantasy journey, so when they take a drink that’s where they go.

Lia is transported into the body of the princess Andromeda the night she is to be sacrificed to Poseidon’s pet, Cetus, as punishment for her mother talking shit, and August takes up the role of Perseus, who rescues her from her fate, claims her as wife, and introduces her to sex for the first time in a delightfully awkward yet charming and, frankly, romantic way.

And don’t get me wrong, the sex scene itself was pretty cringe, but I feel like pretty much any sex scene in a book is when you start having to come up with more interesting terms to describe the act than just, “and then he put it in her and they went to town”. I mean, we’re trying to make this sexy, damn it, and making it all sound clinical by using terms like “penis” and “vagina” is just NOT ALLOWED.

And, come on. It’s kind of funny that, because this is ancient Greece and I guess the word “clitoris” wasn’t a thing (?), Andromeda describes hers as “the knot” (Chapter 8, page 86 – and elsewhere in this chapter).

I’m beating a dead horse, but yeah…romance books + me = bad.

But you know what? Despite all the silliness, despite all the cringe, the actual story of Andromeda and Perseus presented here was pretty darn cute. Not sure I’d call it “sexy”, necessarily, but it was sweet. 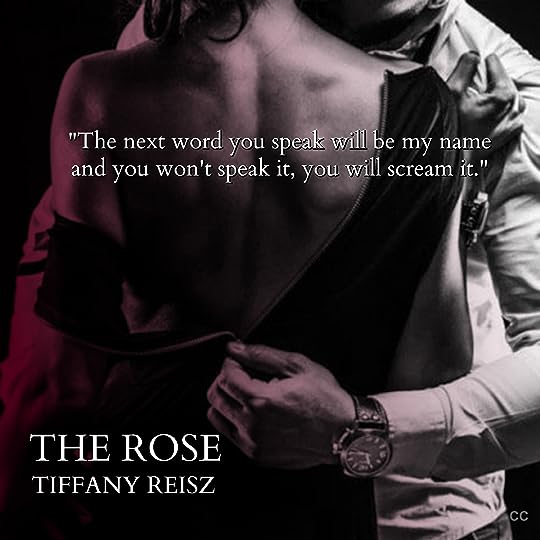 Oh boy. That’s…that’s just cheesy. I think I’d giggle if someone said that to me in earnest!

It shows Perseus, this big and mighty hero, as a big ol’ goofball just looking to make his new wifey laugh. It shows him making every effort to make her comfortable their first time together and extinguishes all her fears around sex by making her giggle, harassing the nosy people hanging outside their bedchambers to listen to them bang, and finally pleasuring her before they…y’know…mash their naughty bits together.

And that’s as far as I’ve gotten in the book.

At least so far.

I do actually plan on reading more! I actually quite enjoyed the experience of reading The Rose. Sure, it’s not art and it doesn’t really encourage deep thought, but it’s also pretty fun and engaging. It’s corny and melodramatic and sometimes a little cringe, but it’s also wholesome (for a sex book) and actually contains some romance. Shocker!

It’s actually pretty nice to read a romance book where there’s legitimate romance. I’ve seen a couple of video reviews of the book After, which is apparently just the new Fifty Shades, and of course I know of the infamous E. L. James Twilight rip-offs, and I’m just kind of sick of this weird trend of romance books with rapey stuff in it becoming popular. I’m assuming people in the romance novel community might feel the same, since it seems like there’s a lot of books out there more like The Rose than like these books.

In any case, it was nice to have some substantial proof of a romance novel where the sex scene is 100% consensual, is not the product of an argument or coerced from either partner from an emotionally abusive asshole, and reflects how fun it can be as well as sexy. I mean, it’s not like every time someone has sex it’s all saxophone music and passionately deep kisses. Sometimes it’s just giggling over nothing and bird noises.

If you have any interest in romance novels, or just want to read a romance book with a distinct lack of using the word “assault” to describe something that’s supposed to be romantic and sexy (at least in the first quarter of the book), then I’d definitely say check The Rose out!

I’ll revisit this book once I’ve finished it, and maybe I’ll have changed my mind by then, but as of right now I’d give this a solid recommendation.

Hope you didn’t mind me going on and on about a romance novel for a while! More reviews coming soon, including a review for the long-awaited finale to this decade of Marvel Studios films, Avengers: Endgame!